I think I had a balanced practice even though the focus was forward bending asanas.

The many many forward bending asanas of primary get balanced on Sunday again, when back bending is the focus.

Today I was able to do three times urdhva dhanurasana. It was hard, but doable. I progress again.

I’m happy that I can still do one of the most intensive forward bending asanas: supta kurmasana (see picture). I take my time till I do the pose. I warm up the body. First I put one leg behind the head while lying on my back. This is more relaxing than septa kurmasana itself. I practice yoga nidrasana, eka pada sirsasana till I finally get to supta kurmasana. The pose feels already better, but not as it used to be.

The final goal is to feel excellent in an asana. The path goes from feeling discomfort to feeling great in a pose.

Practices like today give a lot of motivation to practice daily.

Tomorrow is a day off from yoga……

Nothing is more effective than a daily practice. This is true for everything one wants to learn. It’s also true for the asana practice.

One must be motivated to practice. There are many reasons to step on the mat, yet what finally makes a person practice is individual. One must find it out for oneself.

Most people feel better after a yoga practice This can be a huge motivation.

These days I like to be part of all these online challenges on Instagram. This asana will soon be published under the hashtag #wheeleverywednesday.

My plan was to exercise a variation. I wanted to lift one leg in direction to the ceiling. The foot didn’t lift a tiny bit. I was really grounded. So this was it today. A classic wheel is fine, too.

I want to practice 90 minutes every day. I set a timer. After the twists of second Ashtanga Yoga series the 90 minutes are over. I do a lot of additional exercises to improve all the back bending asanas.

Repetitions and holding the asanas longer than 5 breaths are the most important changes that I made to exercise more effectively.

There is a counter asana to every asana to balance the body. It’s good if this counter asana is relaxing. It needn’t to be paschimottanasana after urdhva dhanurasana. Both asanas require a lot of flexibility. Today my counter asana was just lying on the back while I embraced my legs.

Practice daily for your own well-being, Sharath said on Instagram. It’s so true. This is such a good reason to step on the mat on a daily basis.

It’s hot here. It’s amazing how flexible the body becomes when it’s hot (above 30° Celsius). Also sweating is so much easier.

My focus was primary today. That is the focus is forward bending asanas.

I joined another challenge on Instagram. It’ s rather fun than a challenge. Under the hashtag #thursdayswesplit yogis publish their splits every Thursday. It’s motivating to work on #hanumanasna. Within a week a lot can happen. The splits are a basic asana. All stretching asanas must be practiced with care. It takes time to stretch. Patience is required. Every injury means a set-back.

My biggest obstacles on my yoga path are trips. This usually interrupts my routines. I love both, I love to travel and I love to be at home. But I practice much more often at home than on the road. It’s amazing how quick I can realize progress.

My practices are great these days. I know that if I want to avoid future injuries it’s important not to be overzealous. Nothing can be forced. A daily practice is what will bring success. In addition one must practice the asanas correctly. Sometimes less is more. One must learn to be very attentive to the messages of the body. If this basic attitude is not respected two main things can happen. First one doesn’t progress, what is frustrating. Or one gets injured in the long run, which is even more frustrating.

The asanas deepen with time, but also the understanding of the asanas.

I practice the above pose differently than I used to do a few years ago. The most obvious is that I’m on the ball of my feet. This feels better to me. My feet move inwardly, they don’t press away from each other, exactly the opposite is the case.

The shoulder moves down.

This asana is one of the standing asanas. It comes rather early in the series and it’s difficult. No asana is too underestimate. It’s a deep twist when performed correctly and a slight balancing challenge.

When an asana is mastered it feels good. It amazes me, but the deeper I can get into an asana the easier it becomes and the better it feels.

In the ancient texts one speaks of 84 lakhs asanas. Lakhs is an Indian numeral and stands for ‘a hundred thousand’. Lakhs can also mean an unknown amount. Out of these unlimited asanas are 84 important and 32 are made for the humans. The source of hatha yoga are the classic texts: Hatha Yoga Pradipika, Gheranda samhita and Siva Samhita.

One distinguished between asanas for meditation and asanas that improve strength and flexibility and health in general.

Herewith I refer to a time before Krischnamacharya and the following generation, mainly Sivananda, B.K.S. Iyengar and P. Jois.

Lately I found a rather interesting book by Theos Bernard ‘ Hatha yoga - The report of a personal experience’. I took a lot of this information for this blog post from this book.

Yoga was taught differently than today where yoga became part of the fitness industry.

‘ In order to become worthy of the teachings, the student must first fulfill the moral requirements called the yamas and niyamas, which are the moral prerequisites to the study of Yoga.

The ten Yamas (rules of conduct) are:

The ten Niyamas (rules of inner control) mentioned by those proficient in the knowledge of yoga are:

Comment: I saw different translations of the yamas/niyamas. The general word must get translated into practical habits. That way they can also get adjusted to modern times.

Forty years ago when I attended my first yoga class this was still the spirit. Becoming a vegetarian was not a precondition to be accepted in a yoga class, but it seems to me that it was clear that the student of yoga follows a vegetarian diet as a yogi lives a non-violent life.

These days I have the impression that yoga students realize that performing advanced asanas is easier with a few pounds less. Then they try to find a method to lose weight. A vegetarian diet supports this. That the origin intent of a vegetarian diet was to live a non-violent life seems forgotten. All activities serve one purpose today: Looking awesome on Instagram.

Last but not least the result is more important than the motives. The less animals suffer and get killed for our nourishment the better.

Books can be filled about the yamas and niyamas. It’s worth to explore them, it’s worth to realize that yoga is not only practicing asanas.

The next step to learn hatha yoga was according to Theos Bernard to learn cleaning techniques that used up a lot of time before the asana practice. I don’t want to gulp a tissue and to pull it out again to clean my stomach. For me the cleaning techniques of the ancient yogis are rather an inspiration to reflect on our cleaning habits today

The order to learn yoga according to the ancient texts is as follows: 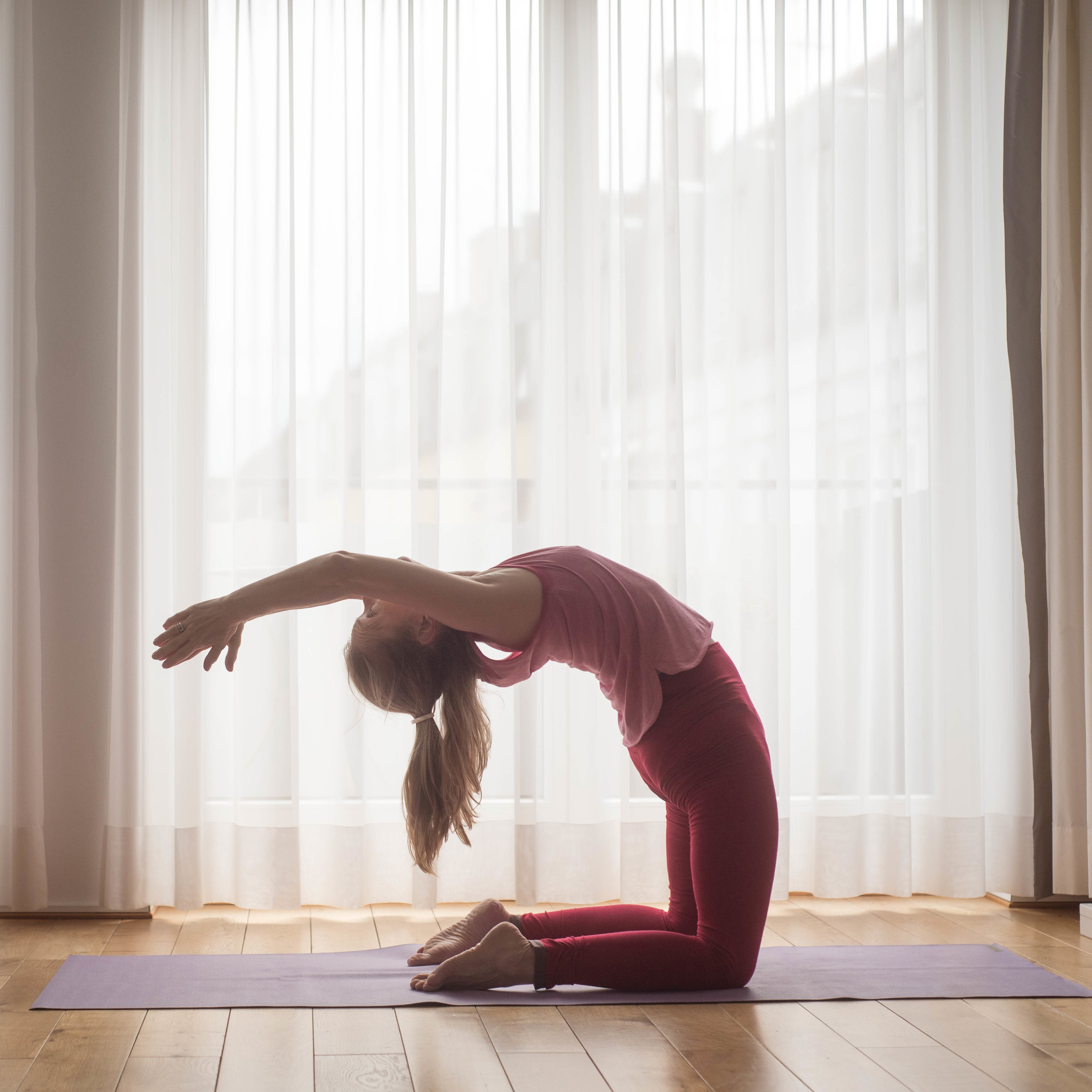 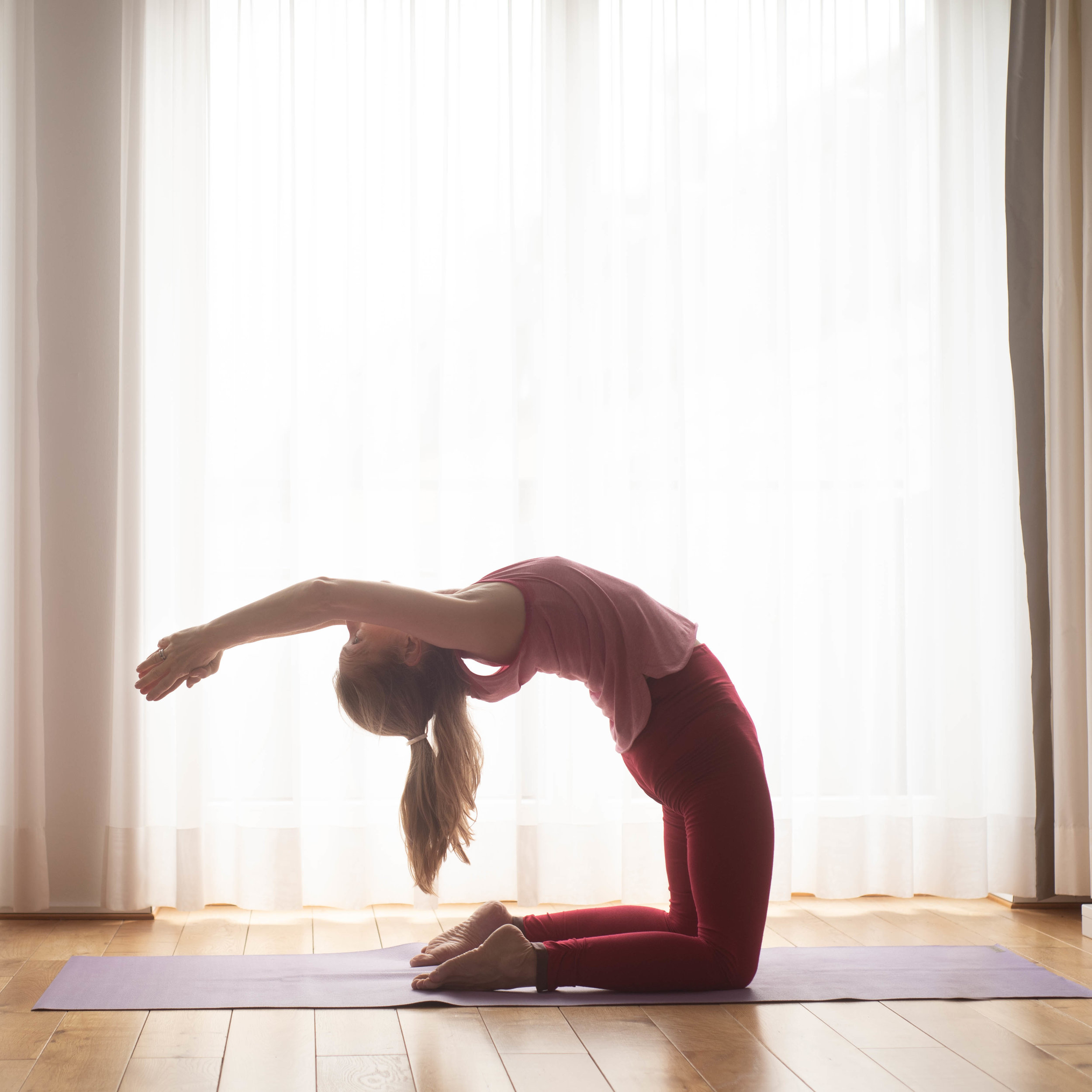 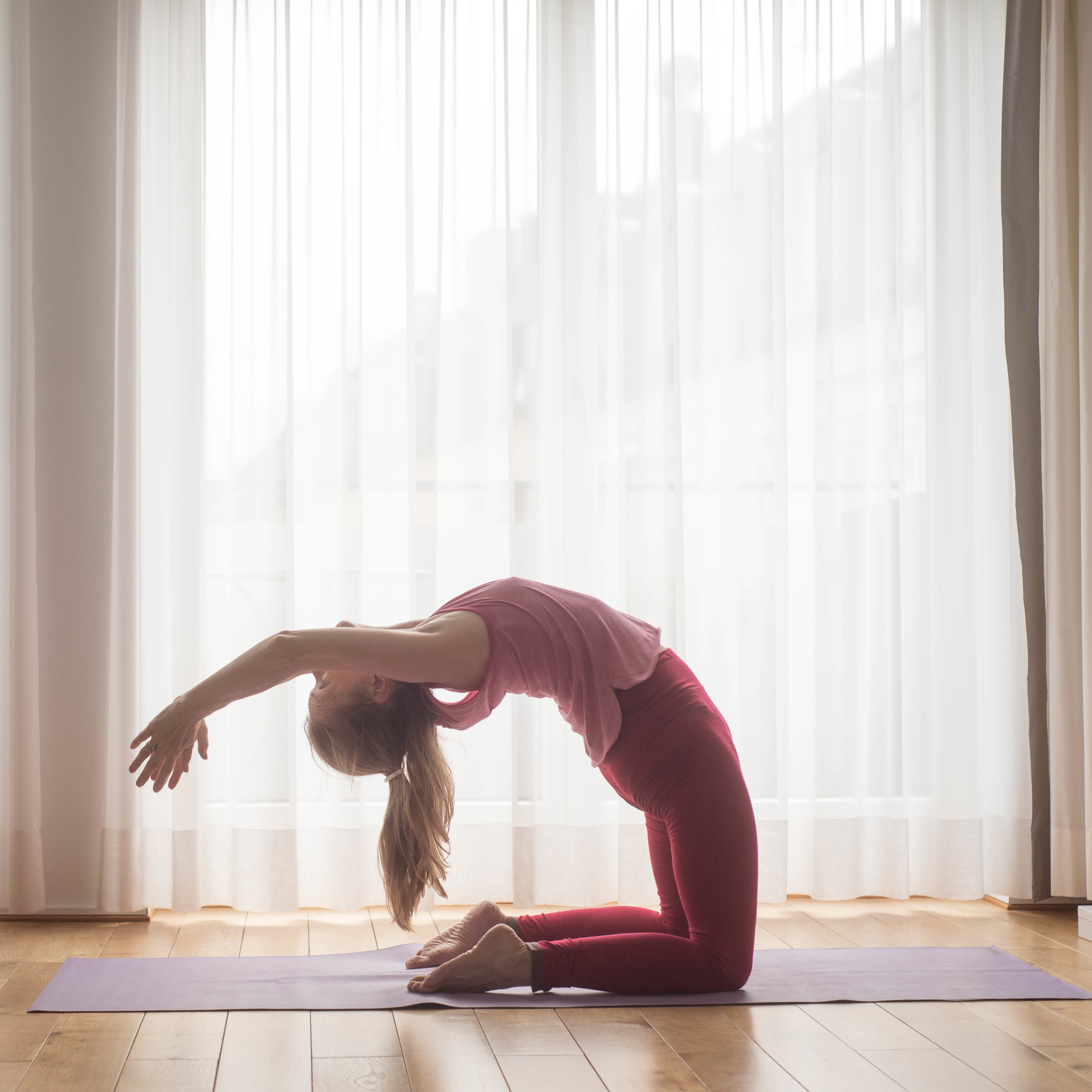 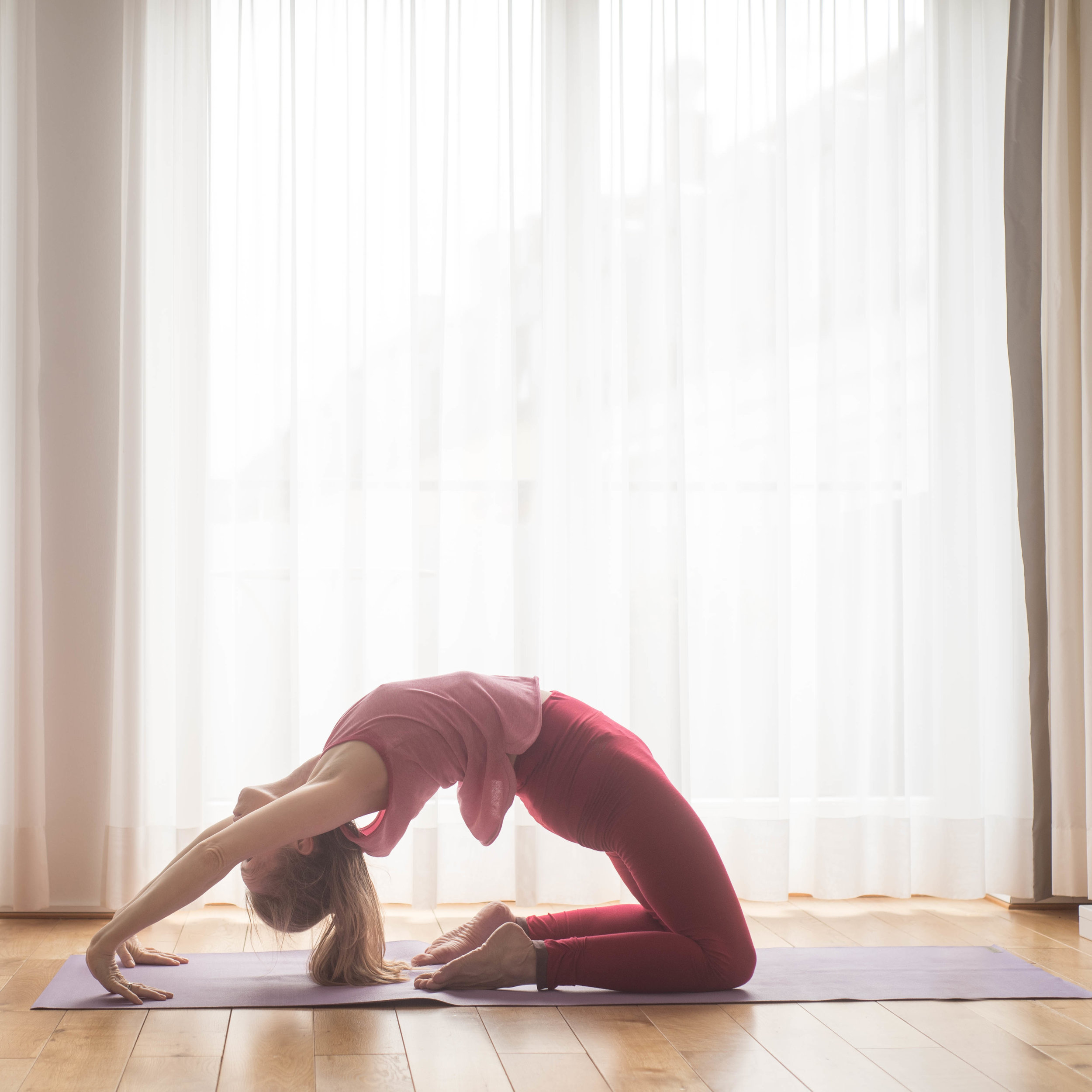 I’m so sure, that the right method speeds up every practice. One can learn fast or slowly. It depends on how I learn anything.

Part of any method is the frequency of the practice. It might be enough to do strength training 3 times a week. Ashtanga Yoga is designed for every day.

A daily practice makes it easier to practice. Body and mind are yearning for the practice after a while.

Today I sweated, because it got warm here. The heat makes the body flexible.

Amazing how good one feels after every practice. I should know it already.

Best practice is to practice every day at the same time. The mornings before breakfast are ideal. The breakfast after the practice feels so deserved then.

Not always it is possible to have time in the morning. I so know this.

This blog is about my yoga journey. It has started decades ago and no end is in sight. My yoga practice became the lynchpin in my life. It even became a life travel guide. Namaste.